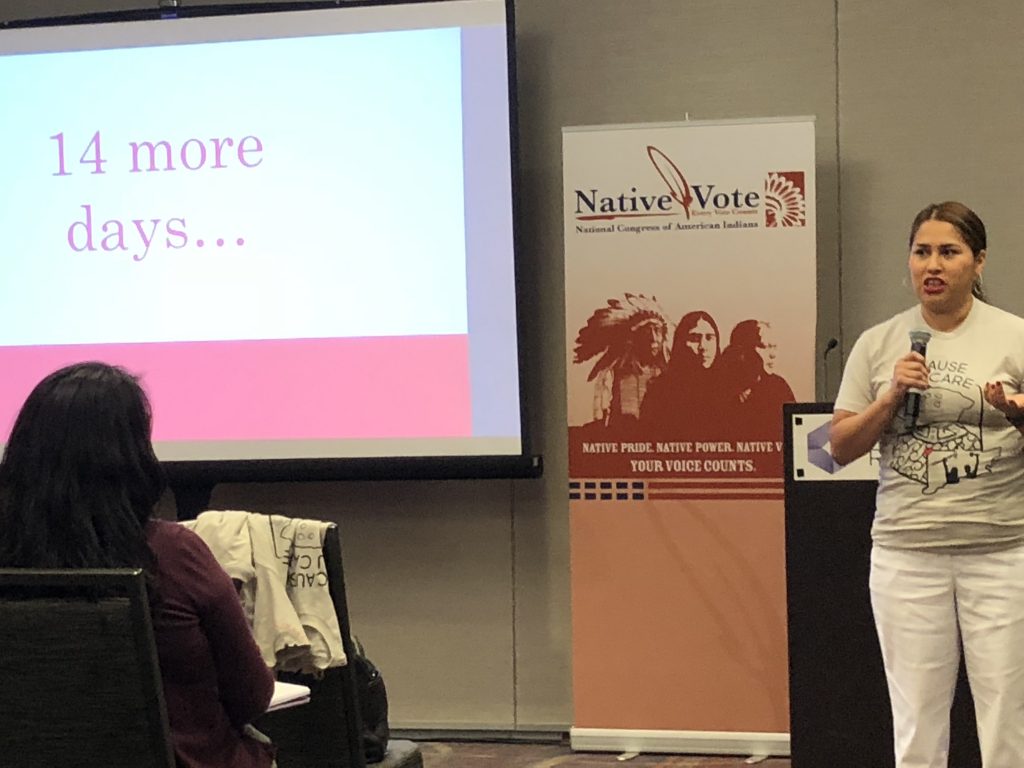 The 2018 midterm election has already moved beyond slogans and planning. Now it’s all about getting out the vote.

Angela Willeford works with the Salt River Pima Maricopa Indian Community in Arizona. She’s gearing up for a voter turnout drive that includes a  phone bank with a list of registered voters. When the call comes in “don’t forget to vote” the voice on the other end of the line is often a friend or relative. “It’s good to hear from someone you know,” she said.

Willeford spoke at a National Congress of American Indians workshop on Native Vote. She said early phone calls are important because they can identify problems with registration when there is still time to fix it. For example in Arizona a voter’s ID, tribal or state, must exactly match the voter registration roll.

The community also publishes a voter guide and educates tribal citizens about the importance of showing up.

We need you to vote is a consistent message from the tribe. And it’s a reminder that it wasn’t that long ago that tribal citizens were not allowed to vote in Arizona. Before 1965 tribal members were blocked from voting under state law.

Across the country we already know a few things about the 2018 midterm election: Turnout will be higher than normal and a lot of people are voting early.

Early voting has become popular with 37 states offering some form of ballot access before Election Day.

“Usage of early voting has recently surged among traditionally underrepresented voters,” reports Demos. “The 2008 election marked a dramatic increase in early in-person voting among African American and Latino voters. And in Florida, where approximately 50 percent of ballots were cast early in 2012, African-American usage of early in-person voting has exceeded White usage in four of the five most recent federal elections. Research suggests that turnout increases are maximized when early voting is combined with Same Day Registration.”

That best practice often fails to include Indian Country. According to the Native Vote project, “compared to other voters, many Native people have less access to early voting and voter registration.”

Some 8 million people have already voted — more than in previous election cycles at this point.

The United States has a lower voting participation rate than other countries. In presidential elections only about 60 percent of those who register, vote. In midterm elections, like this one, it’s only about 40 percent.

The interesting thing here for Indian Country. A low turnout election cycle can mean more influence for groups that do come out and vote. The Native vote really could decide an election — and has in the past. 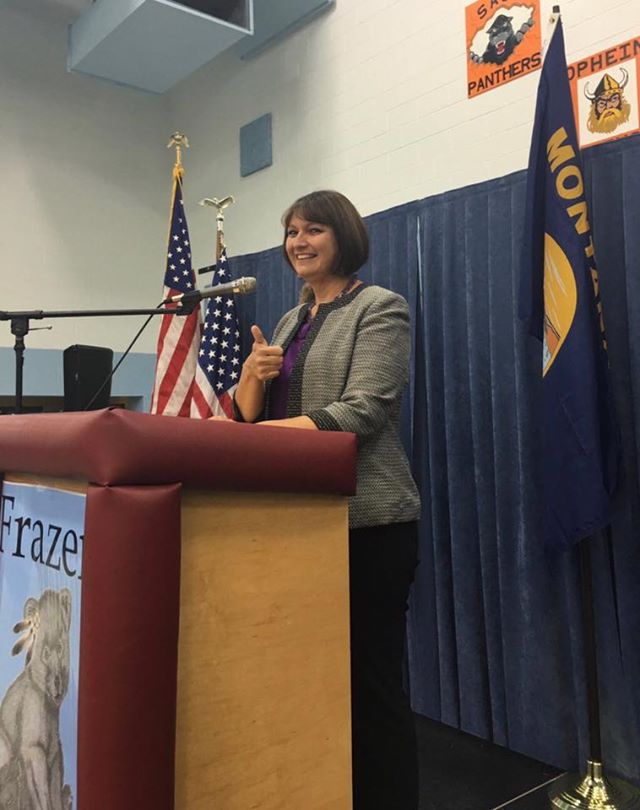 Two years ago Denise Juneau was making history. She was running for Montana’s only seat in Congress. It was a hundred years since Jeannette Rankin had won that same seat, the first woman ever elected to the Congress. So a century later Juneau, Mandan Hidatsa and Arikara, would be the ideal first Native woman to serve. She was following her plan perfectly, raising $3 million, crisscrossing that huge state, and mobilizing voters.

Juneau is now Superintendent of Schools for the city of Seattle. She said she didn’t feel bad about losing because “we did everything we were supposed to. We just lost.”

Then she turned philosophical.

She said every time another Native woman steps up to run for any office, whether that be the state legislature, the city council, the. Congress, it paves the way. There’s sort of a pipeline, which is really awesome right now, that there’s never been a path for Native women to just really step up. “I believe right now, we’re in a time and space where we see that happening,” Juneau said. “There will be a first at some point.”

The only exception: Congress. There are three Native women running and five Native men for seats in the U.S. House of Representatives. 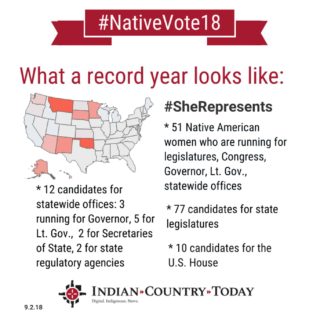 Last week I even added a new name to my tally, Yvette Herrell, who running for the second congressional district in New Mexico as a Republican. The Cherokee Nation let me know that Herrell is a citizen. So New Mexico could send two, not one, Native American women to the Congress.

Deb Haaland, Laguna Pueblo, is the Democratic nominee in the state’s first congressional district. Sharice Davids, Ho Chunk, is a candidate in Kansas.

Beyond Congress, there are two Native women running for governors, Paulette Jordan, Coeur d’Alene, In Idaho and Andria Tupola, Native Hawaiian, in Hawaii. And there are four Native women running for lieutenant governor, Debra Call, De’nina, in Alaska; Anastasia Pittman, Seminole, in Oklahoma, and in Minnesota, two candidates, Peggy Flanagan, White Earth, on the Democratic side, and Donna Bergstrom, Red Lake, as the Republican nominee.

Yes … Native American women are making history this election. Next week we will dig into some numbers. 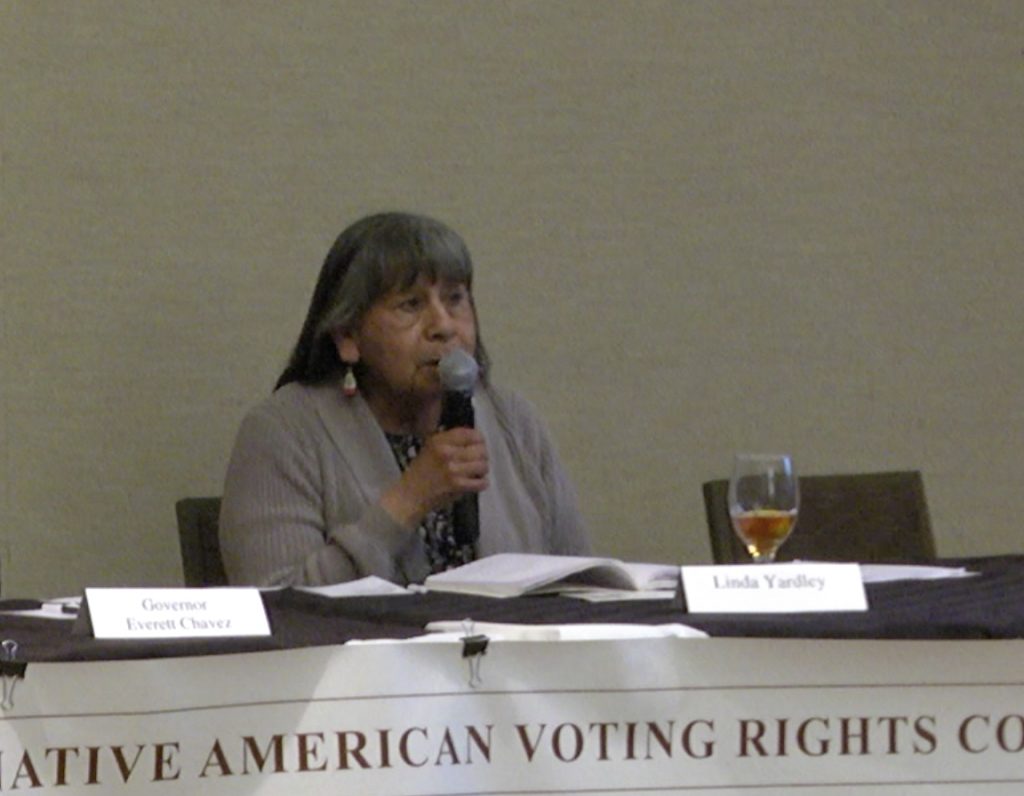 Linda Yardley is a long time voter advocate from the Taos Pueblo. She testified Friday at a hearing of the Native American Voter Alliance at the Pueblo of Isleta.

The Native American Voting Rights Coalition has been holding hearings across the country since last September to document the challenges faced by Native American voters. Witnesses include tribal leaders, advocates, and voters.  Barriers to equal voting rights have been documented such as “unreasonably long distances to polls and inability to access transportation keep Natives from voting.”

Why should Native Americans vote? Linda Yardley from Taos Pueblo had one answer at a field hearing of the Native American Voting Rights Coalition Friday.

Yardley told the story of Taos Pueblo and its century-long fight to have the United States return its sacred Blue Lake. The land had been taken by the U.S. Forest Service in 1906 and a former U.S. Secretary of Agriculture (and therefore head of the Forest Service), Clinton P. Anderson, was by the late 1960s a U.S. Senator from New Mexico.

Yardley said he told our tribal leaders: “I’ll be dead before you ever get your land back.”

And that was their U.S. Senator. The Pueblo eventually won, when President Richard Nixon agreed to return Blue Lake.

But. as Yardley testified, “If our people had been voters, registered voters, Clinton Anderson probably would not have had the ability to say that. This is why it’s so important for me personally because I don’t want our people to go through the hardship that we did to secure our tribal lands, our sacred lands back to us.”

The Native American Voting Rights Coalition has been holding hearings across the country since last September to document the challenges faced by Native American voters. Witnesses include tribal leaders, advocates, and voters.

In earlier hearings, witnesses documented the persistent suppression of the Native vote in North Dakota, South Dakota, Wyoming, and Montana. This included a number of barriers to equal voting rights including “unreasonably long distances to polls and inability to access transportation  keep Natives from voting.”

Deb Haaland, Laguna Pueblo, is now running for the U.S. Congress to represent Albuquerque, and has worked on voting rights issues in New Mexico for many years. She recalled a Saturday morning visit to a home in San Felipe Pueblo in 2008 where she registered seven people to vote. She said the last person to register was a man, probably in his mid 50s,  “stood up, shook my hand, and said, ‘thank you so much, I have always wanted to vote but I never knew how.’ If that does make you feel like we have a lot of work to do in New Mexico, I don’t know what will.”