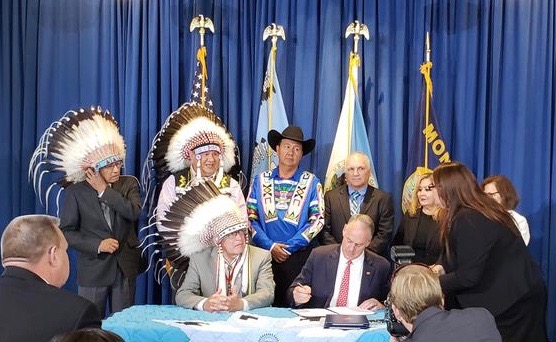 Historians will often say the formal treaty era between tribes and the United States ended in 1871. The evidence is language inserted into an appropriations bill that clearly stated “henceforth, no Indian nation or tribe . . . shall be acknowledged or recognized as an independent nation, tribe or power with whom the United States may contract by treaty.”

But watch what Congress does, not what it says. The treaty era, no matter what it is called, continues to this day. And it’s still quite formal.

Last week three governments came together in a formal ceremony at the Department of Interior to sign and celebrate the Blackfeet Water Compact.

This begins the implementation phase of a modern treaty that has been in negotiation for three decades.

The compact required approval of the tribe, Montana, and the United States. The Montana Legislature approved the compact in 2009. Congress passed a bill that was then signed into law by President Obama on December 16, 2016, which provided federal approval of the compact as well as $422 million (in addition to the state contribution of $49 million) in funding for water-related projects on the Reservation. Then on April 20, 2017, Blackfeet citizens voted to approve the Blackfeet Water Compact and Settlement Act. The idea of water settlements is that they are a more effective path than litigation, which can take even longer, and end up being less satisfactory to all of the parties involved. Settlements, on the other hand, quantify the water rights and provide certainty to water users.

“It has been a long arduous journey, a tough journey,” said Blackfeet Chairman Harry Barnes in Washington last week.

“This is historic,” said Interior Secretary Ryan Zinke Tuesday. “One of the challenges is over, a compact between nations.”

Montana Sen. Jon Tester, a Democrat, echoed the historic nature of the settlement and said he would continue to press in the Congress for funding of all the promises.

Paying the full cost of the compact’s implementation remains a challenge. In

The total cost of the compact will be $422 million, plus the state’s contribution of $49 million. So far Tester has been able to secure $10 million in federal funds.

This might be a era for a treaty-like promise. The Supreme Court Monday effectively held the state of Washington and the United States to live up to a treaty right (no matter the cost). So this treaty, formal or not, now puts the United States on record with a new promise to fund water projects.