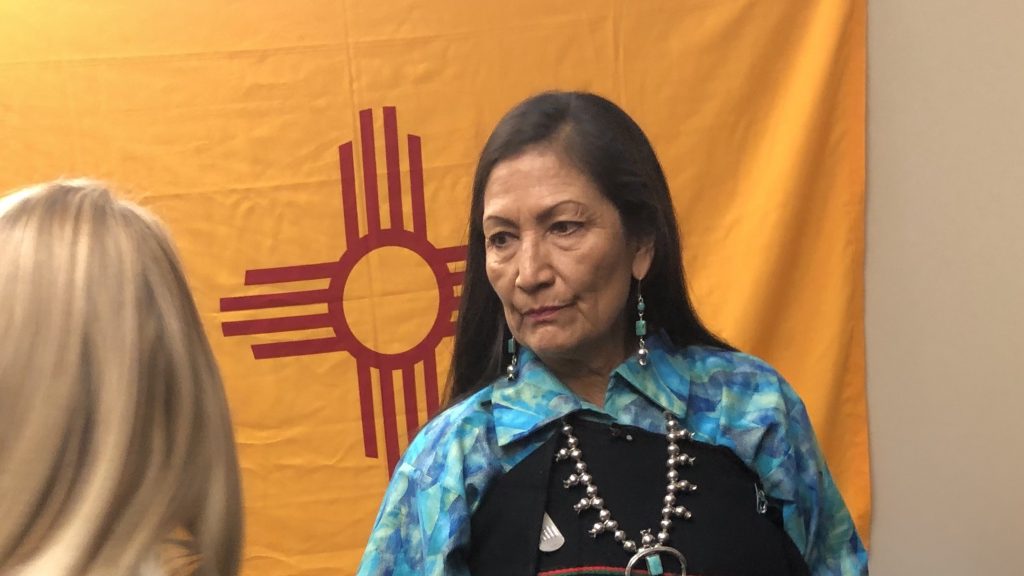 Confirmation hearings for Rep. Deb Haaland begin this week in the U.S. Senate.
This is Trahant Reports.
She’s the first Native American to ever go through a confirmation hearing for a cabinet post — and if confirmed by the Senate she will be the first ever tribal citizen to run a major agency, the Interior Department.
And there is a lot of history unfolding.
Rep. Haaland stood with the water protectors at Standing Rock. She has stood with those opposed to oil and gas development in her own home state in New Mexico and she was once a government witness in a hearing about sacred lands on the U.S. border.  At that event she told the Trump administration and the U.S. Border Patrol:   “I don’t know how you can sleep at night.”
Haaland is a citizen of Laguna Pueblo.  She is 60 years old and her job would be extraordinary. The Interior Department has a remarkable mission, managing the relationship with tribal governments, administering mineral rights, national parks, wildlife and endangered species, and approving oil and gas drilling and mining.
And that is the issue that is bringing out the opposition. Republicans generally favor oil and gas development on federal lands. The Biden administration has said climate change — not energy independence — will be its touchstone.
A lot of eyes will be watching Sen. Joe Manchin from West Virginia. He’s chairman of the Energy and Natural Resources Committee and a long time supporter of the oil and gas industry. After a vote earlier this month, he reaffirmed that support. He said: “My position on the oil and gas industry has not changed. I have always been and will always be an outspoken advocate for an all-of-the-above energy policy that includes fracking and responsible energy infrastructure development, like the Keystone XL pipeline.”
One early opponent is Montana Sen. Steve Daines. He has said Haaland’s positions are radical, citing the Green New Deal and her opposition to fracking.
He recently tweeted that Rep. Haaland’s nomination is “extremely alarming. Rep. Haaland has called for the elimination of oil, natural gas AND coal. America can not afford this radical transition away from reliable energy.”
Daines has said he will use procedural powers to slow or block her nomination.
Still, if Chairman Manchin, and all of the Democrats vote together, Haaland will be confirmed.
The Haaland nomination is also a key indicator about the role of tribal nations in the Biden administration. And tribes have high hopes. There are so many issues that have never received full attention from the federal government, ranging from the co-management of public lands and wildlife to the actual return of lands taken illegally.
Tribes will be expecting a lot more than just window decoration; pushing for a secretary who understands tribal issues and is ready to act accordingly.
But first she has to get past the Senate.
I am Mark Trahant.