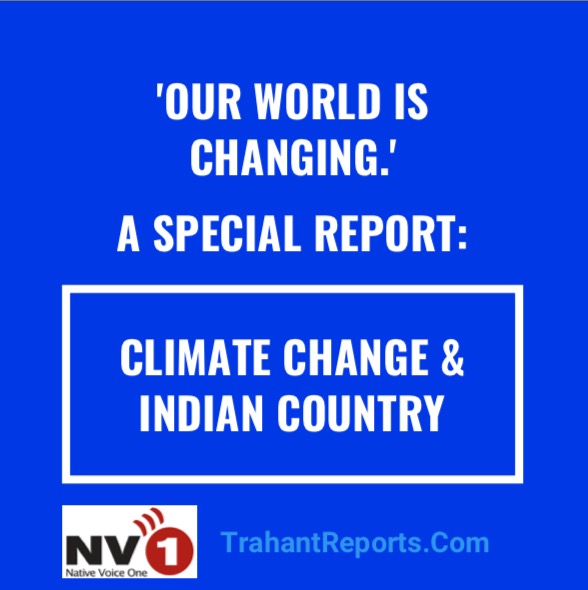 Indian Country is already impacted by climate change. As Sen. Lisa Murkowski said at at the Alaska Federation of Natives: “Our world is changing.”  Yet the senator is working to open the Arctic to more development, not less. And a group of elders from the Bering Sea talks about what climate change looks like for the people who live in the north. So how do we change course?

This is a special edition of Trahant Reports. I am Mark Trahant.

Let’s play with a word, and an idea. “Hegemony.” It means the dominance of one political group over all others. That, at this moment, is the Republican brand. President Donald J. Trump, a Republican Senate, a Republican House, and a conservative, if not Republican, court system that will judge the law and the Constitution for years to come. Hegemony.

But that word has been corrupted. Once the Greek word, hegemon, meant to lead. But the root word “heg” in English later became to seek, or better, to “sack,” as in ransack.

So Hegemony might be the ideal word to describe the Trump era. The goal is to ransack (instead of lead). Ransack the government. Or at least the idea of government.

There is no better example of hegemony than the debate about the climate. The Republican brand from top to bottom is bent on grabbing as much natural resource loot that can be carried away in a short period of time.

Except this: Hegemony is an illusion. What seems like absolute power is not.

The Trump Administration released in early November the government’s climate assessment. The comprehensive report is clear: “It is extremely likely that human influence has been the dominant cause of the observed warming since the mid-20th century. For the warming over the last century, there is no convincing alternative explanation supported by the extent of the observational evidence.”

In other words: There is no debate within the scientific community.

But Congress acts as if it has power over nature.

So instead of a pause, and a rethink about climate policies, there is a hurry up and drill mentality. (Even if you love oil: Why now? Why not wait until it’s worth something? The answer is because it will never again be that valuable. The era of extraction is over.)

Sen. Lisa Murkowski is a fascinating character in this debate. She’s fought hard for Medicaid and for the Alaska Native medical system.

So she says it’s not health care, but climate that will define our generation.

The most recent climate assessment by the United States government puts it this way: “Alaska has warmed twice as fast as the rest of the nation, bringing widespread impacts. Sea ice is rapidly receding and glaciers are shrinking. Thawing permafrost is leading to more wildfire, and affecting infrastructure and wildlife habitat. Rising ocean temperatures and acidification will alter valuable marine fisheries.”

Yet the budget that Murkowski championed — and her role in opening up the Alaska National Wildlife Refuge would seem to take a very opposite stand. Her words here on that process.

So many conflicting messages.

But as she said at AFN the debate is changing. The world is watching growing threats from hurricanes, fires, and other dramatic natural events. A new report in the scientific journal, the Lancet, asks this question: How well is the world responding?

“The answer is, most of our indicators are headed in the wrong direction,” said Nick Watts, a fellow at University College London’s Institute for Global Health. “Broadly, the world has not responded to climate change, and that lack of response has put lives at risk. … The impacts we’re experiencing today are already pretty bad. The things we’re talking about in the future are potentially catastrophic.”

The Lancet says that “just in the United States,” already 3,500 people who have had to move because of dramatic climate changes. Most of of those people live in Alaska.

We have seen globally a five-fold increase in natural disasters, such as storms that are more intense.

“Today, there is scientific proof that climate change is largely responsible for the dramatic increase in the intensity and devastation caused by the hurricanes in the Caribbean and by many other phenomena around the world,” said United Nations Secretary-General António Guterres after a tour of Dominica.

That island, including the Kalinago Indian Territory, was hit with successive category five hurricanes. “I have never seen anywhere else in the world a forest completely decimated without one single leaf on any tree,” said Guterres, who flew by helicopter over some of the most affected areas, including Kalinago Territory.

We know, yes, know, that climate change will leave parts of the earth uninhabitable (as we have already seen in tribal communities in Alaska, Washington and Louisiana.) How many times can you rebuild when storm after storm wipes out the life you know?

How do we as a country, as a species, decide when we can no longer rebuild or stay? I’ve been thinking a lot about the Iranian city of Ahvaz where temperatures last summer reached 129 degrees. When will it become too hot, 130? 132? What’s the number that we just hit before we leave?

There has already been a global temperature increase of about 0.75 degrees Fahrenheit — the planet is not a uniform oven. But local spikes can be dramatic and dangerous. Heat waves, defined as extreme temperatures that persist for at least three days, are on the rise. As The Lancet reported: Between 2000 and 2016, the number of people exposed to heat waves climbed by 125 million vulnerable adults.. During 2015, the worst year on record, 175 million people suffered through sweltering temperatures.

Who will be the next climate refugees?

Already in Puerto Rico that demographic transformation is occurring.

Maria Cristina Garcia, a Cornell University historian and immigration expert projects a massive relocation to the United States. She says whether that migration will be permanent or temporary is still anyone’s guess. Much depends on the relief package that Congress negotiates.

Puerto Rico has 3.7 million residents. Think of the magnitude of so many people, half a million or more, moving to Florida, Texas or any other state.

Relocation. That’s a familiar word in Indian Country. This is a story with far too many historical examples. But, because of that, we already know that forced relocation is not just “moving.” It’s a complex set of issues. There will be costs ranging from behavioral health to increased joblessness and poverty. The idea of hundreds of thousands of American refugees should be seen as an immediate and dangerous crisis.

And right now we don’t really think of Californians as climate refugees, but we should.

At least 100,000 people were evacuated and nearly 6,000 homes and buildings were destroyed. And this number will only grow throughout and it ought to raise questions about where humans should live.

California’s average temperature has risen about 2 degrees Fahrenheit during the second half of the 20th century. Altogether this has led to more “fuel aridity” — drier tree canopies, grasses and brush that can burn.”

One study projects California dry periods going from about five extreme dry “events” during the decade of the 1930s, to about 10 per decade by the 2070s.

Again, raising the question of where people can be? Think of the tension about immigration now — and multiply that by a factor of ten or a hundred to get a sense of the scale ahead.

Back to the illusion of hegemony. Candidate Donald Trump promised to bring back the coal industry. But can he?

The chief executive of a private coal company, Robert Murray, sums up the illogic a few weeks ago he said on the PBS’ News Hour: “We do not have a climate change problem” and 4,000 scientists told him that “mankind is not affecting climate change.” Murray’s former lobbyist has been nominated as the deputy director of the Environmental Protection Administration.

Already the EPA has proposed rolling back the Obama Administration’s Clean Power Plan. But the new coal regulations (or more likely, non-regulations) will still be challenged through the regulatory process and in court.

But it is the markets, not the government, that is responsible for coal’s decline.

The U.S. Energy Information Administration reports that coal consumption picked up after President Trump’s election but has started its decline again.

And the jobs that were promised? There are now under 60,000 people employed nationwide by the coal industry. And about a thousand jobs, at most, were created since Trump took office.

By comparison during that same time frame one of the fastest growing jobs, wind turbine service technician, created 4,800 new jobs at an average salary of $52,260. But the big numbers are in health care (where we should be growing jobs) an industry that created 384,000 new jobs as home health aides in the last year.

Yet some communities from the Crow Nation to the Navajo Nation have been told that coal and its jobs are coming back.

One more note about the shifts in coal markets: The Lancet calls this one of the “glimmers of hope.” The report said many countries are moving away from coal-fired power plants, which are a source both of carbon emissions that fuel global warming and pollution that can cause immediate health problems in nearby communities.

A group of elders from the Bering Sea recently commissioned a report on their Ecosystem and Climate Change. It said that the abundant marine resources that have fed Yupik and Inupiaq people for generations are at risk. Already these elders are seeing a change in seasonal ice, and the loss of sea ice is in turn causing a dramatic increase in ship traffic through highly sensitive and important Arctic waters. (The science here is exactly the same as what was reported in the National Climate Assessment.)

How do we change course? How do get a pause? One way is to wait until it’s too late.

In Dominica there is a forced rethinking that followed the hurricanes. Roosevelt Skerrit, the country’s prime minister,  recently put it this way: “Our devastation is so complete that our recovery has to be total. And so we have a unique opportunity to be an example to the world, an example of how an entire nation rebounds from disaster and how an entire nation can be climate resilient for the future. We did not choose this opportunity. We did not wish it. Having had it thrust upon us, we have chosen actively and decisively to be that example to the world.”

A shining example, yes, but the cost has been extraordinary and painful. The price of hegemony.