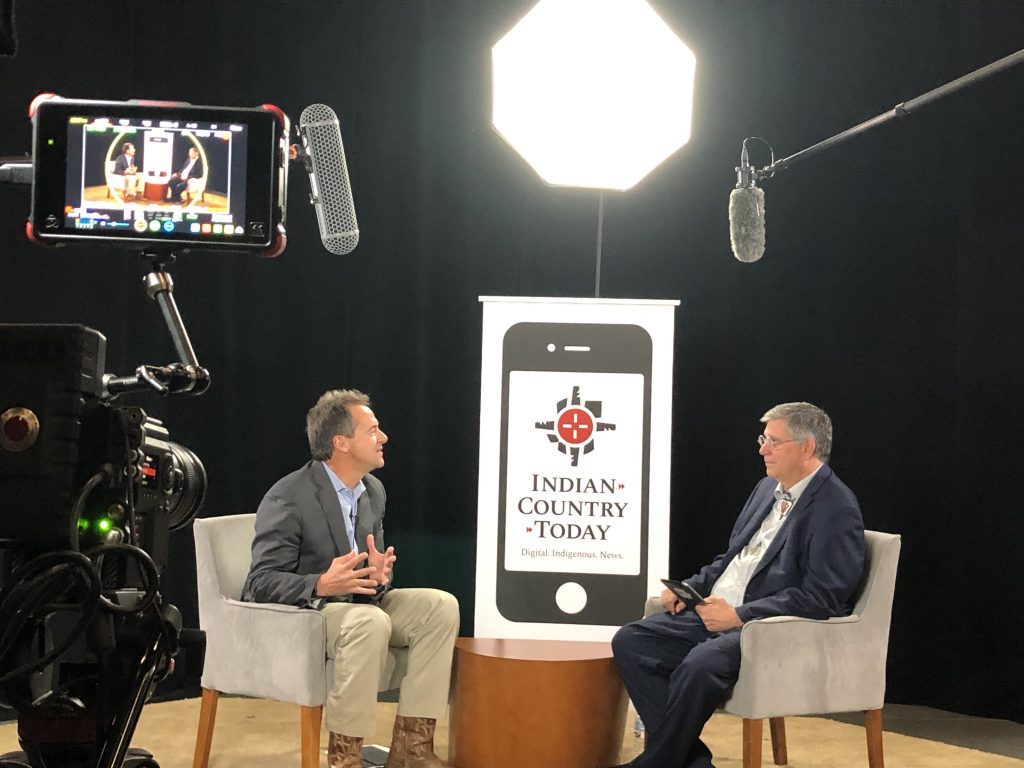 Montana Gov. Steve Bullock is a Democrat who is campaigning for his party’s nomination for President of the United States.

Last week he visited with Indian Country Today — the first time a presidential candidate has ever visited a tribal newsroom, or in this case, a visit to our studios.

The interview was wide ranging, exploring many of the issues that impact Indian Country.

Start with symbols. Clearly that’s matter in government: A portrait of Andrew Jackson? Or flags from every tribal nation. Bullock said in Montana Capitol “the flags of all of our tribal nations are right next to the U.S. and the Montana flag.”

He said visitors from around the world ask about those flags and then learn from their visit something about tribes and the unique relationship.

Bullock said in Montana it’s important to have Native Americans in government representing offices across the board. This, he said, makes any agency better from the weights and measures’ agency to higher education.

And speaking of education, if elected to the White House, Gov. Bullock says he would double the amount of funding that Indian education gets every year. And that process would include better consultation with the tribes  so that resources are being dictated properly.

“Nation to Nation consultation must occur. And that’s from everything from environmental action to education. You know, I was asked initially, where’s your plan for Indian country? And I can talk about a whole lot of things that I’d like to do,” such as fixing broken promises or reforms called for by the Commission on Civil Rights. “But if you’re actually going to have a real plan for Indian Country, you can talk about what you want to do as a candidate. But if you’re not actually doing nation-to-nation consultation and saying we build this together, then you probably don’t fully understand or appreciate the importance of making sure a government to government consultation creates a path forward.”

Gov. Bullock is a Democrat in a Republican state. And so he makes the case for working across party lines. He was able to convince a Republican-controlled legislature to continue with the expansion of Medicaid — a policy prescription that could be helpful nationally if the courts strike down the Affordable Care Act (and that Medicaid expansion).

Presidential candidates have expressed a lot of interest in Indian Country voters this campaign season. There was a candidate forum in Iowa this summer that included eleven candidates, including the Montana governor, and organizers are talking about another forum in Nevada.

And Indian Country Today has extended an open invitation  to all of the presidential candidates to visit Arizona for an in-depth interview.