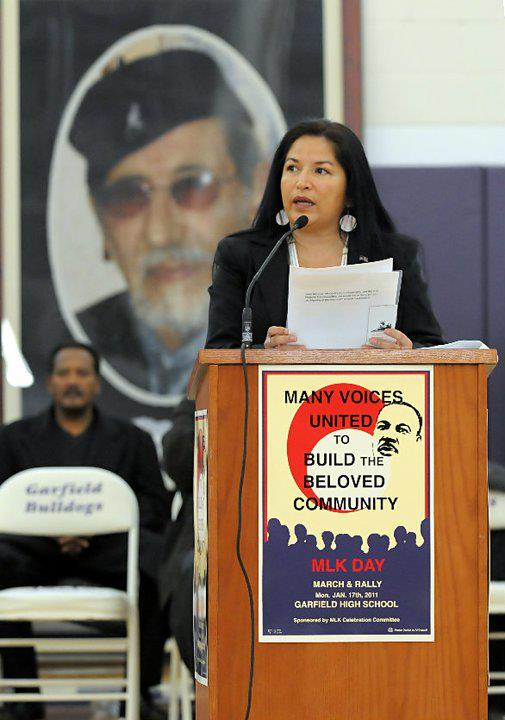 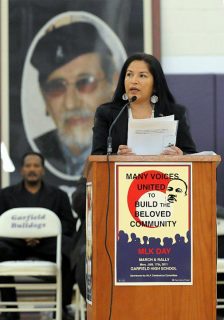 Sen. Claudia Kauffman speaking in Seattle. She is a candidate for Seattle’s Port Commission. (Photo via Facebook.)

There is a lot of attention paid to Native American candidates running for Congress or many other visible political offices. But There are also elected offices that we don’t think about, yet are critical, and by definition, a that seat at the table. Claudia Kauffman is running for such a job, Commissioner for the Port of Seattle. This is a $650 million a year, public business that manages Seattle’s seaport, airport, and a portfolio of real estate.

It’s such a simple thing: Every citizen should have a voice at the table when decisions are made. It’s a powerful notion because no democracy can sustain itself unless all of its people, all of those who have a stake in the outcome, are included.

But that idea remains illusive. And never more important.

So what does a seat at the table look like? It means more Native Americans elected as governors, members of Congress, U.S. Senators, mayors, county executives, judges, members of state legislatures, and, yes, why not, even the presidency. Indian Country deserves more of a voice, both in terms of fairness and electing representatives based on our share of the population. Wait. That’s fairness, too.

There are elected offices that we don’t think about, yet are critical, and by definition, are that seat at the table.

Claudia Kauffman is running for such a job, Commissioner for the Port of Seattle. This is a $650 million a year, public business that manages Seattle’s seaport, airport, and a portfolio of real estate.

Tribes and native people are impacted by port decisions ranging from cleaning up rivers and salmon habitat to regulating oil drilling rigs that berth in Seattle on their way to Arctic waters.

Kauffman is Nez Perce. She is the first Native American woman who was elected to the Washington state Senate a decade ago. She also works for the Muckleshoot Tribe as the Intergovernmental Affairs Director. One of her tasks is distributing $1.3 million a year to more than 200 local schools, churches and not-for-profit organizations. She’s also been a trustee at The Evergreen State College.

Kauffman grew up in Seattle’s Beacon Hill as the youngest of seven children. “I come from a family with a long history of giving back to the community,” Kauffman says on her web site.

A couple of years ago Kauffman told the port commission that it could use her perspective as a working mother, a small business owner, and a community leader.
In her campaign brochure, Kauffman said she will build on her tribal contacts and strengthen ties with the 29 tribes in Washington state. Tribes “are large employers,” she said. “In 2010, they paid $1.3 billion in wages and purchased $2.4 billion in goods and services.”
This will be a challenging race. But Kauffman is no stranger to that world. She raised nearly $300,000 in her bid for the Senate. She was one of those candidates who knocked on every door at every opportunity. She also has a political organization — a network of people willing to work extraordinarily hard so that she can win her election.
This is what a seat at the table looks like. I am Mark Trahant. 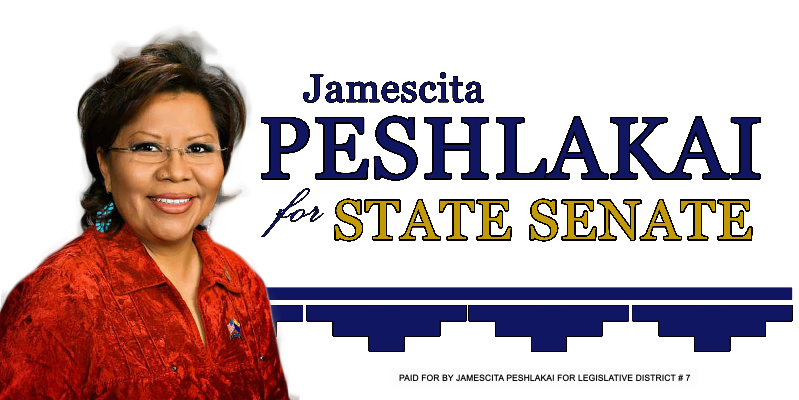 Critics said Arizona’s legislative district 7 was designed to favor Democrats. Last week the Supreme Court ruled in favor of the process used by the Arizona Independent Redistricting Commission . Rep. Jamescita Peshlakai is running for the Senate in that district. (Campaign photo)

The toughest challenge for any democracy is making certain that the rules of voting are fair. How fair? Well, a system must allow voters to easily toss politicians out of office.

So every politician in the world proclaims that’s how it ought to be, and then, often silently, accepts or promotes rules that favor incumbency.

That is a special problem for American Indian and Alaska Native voters because when we vote we are trying to change things.

Voters want fair elections even if politicians don’t. An Arizona initiative was passed in 2000 to strip politics from the process of redistricting. The new law created a five-member Independent Redistricting Commission to take away the task from the legislature.

One result is Arizona’s 1st Congressional District, and that includes the highest percentage of Native Americans in the country. Norm DeWeaver, who does fantastic demographic work as a consultant to tribes and tribal organizations, pointed out “that this did not happen by accident.” The Navajo Human Rights Commission regularly testified and offered statistical insight before the district lines were drawn.

It’s hard to understate the importance of redistricting to the success of Native Americans at the ballot box. In Arizona, Montana, and other states where the tribal vote is effective, there is a match between geography and demographics.

Basically the right district lines can give a reservation or a community the chance to vote together, as a bloc. But not every state does that.  Alaska Natives are underrepresented because the district boundaries dilute that vote.

That’s a lot of background, but that brings me back to last week’s  Supreme Court’s ruling about Arizona’s redistricting.

This was the second such case involving Arizona and the focus was on how equal each district must be in terms of population. The plaintiffs argued that the commission packed more people into Republican districts than Democratic ones (by a variation of 4 to 8 percent). The commission did this to specifically group minority voters, including Native Americans.

One of the districts debated in the case is Arizona Legislative District 7. This district is “underpopulated by 4.25 percent” and one reason for that is the district does not include Flagstaff because of different community interests, not politics. There are three Navajo candidates running to represent District 7 in the Legislature; Jamescita Peshlakai in the Senate and Wenona Benally and Eric Descheenie for the two House seats.

Political districts are not just lines on a map, but a reflection of a community, so it’s vitally important that every member of that community have a voice. And the opportunity to win. 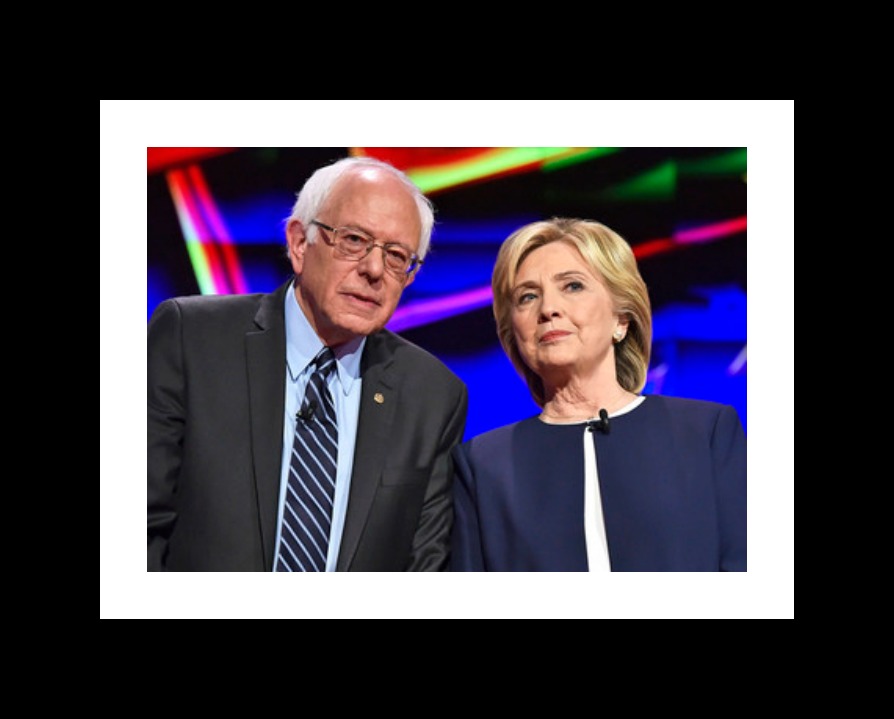 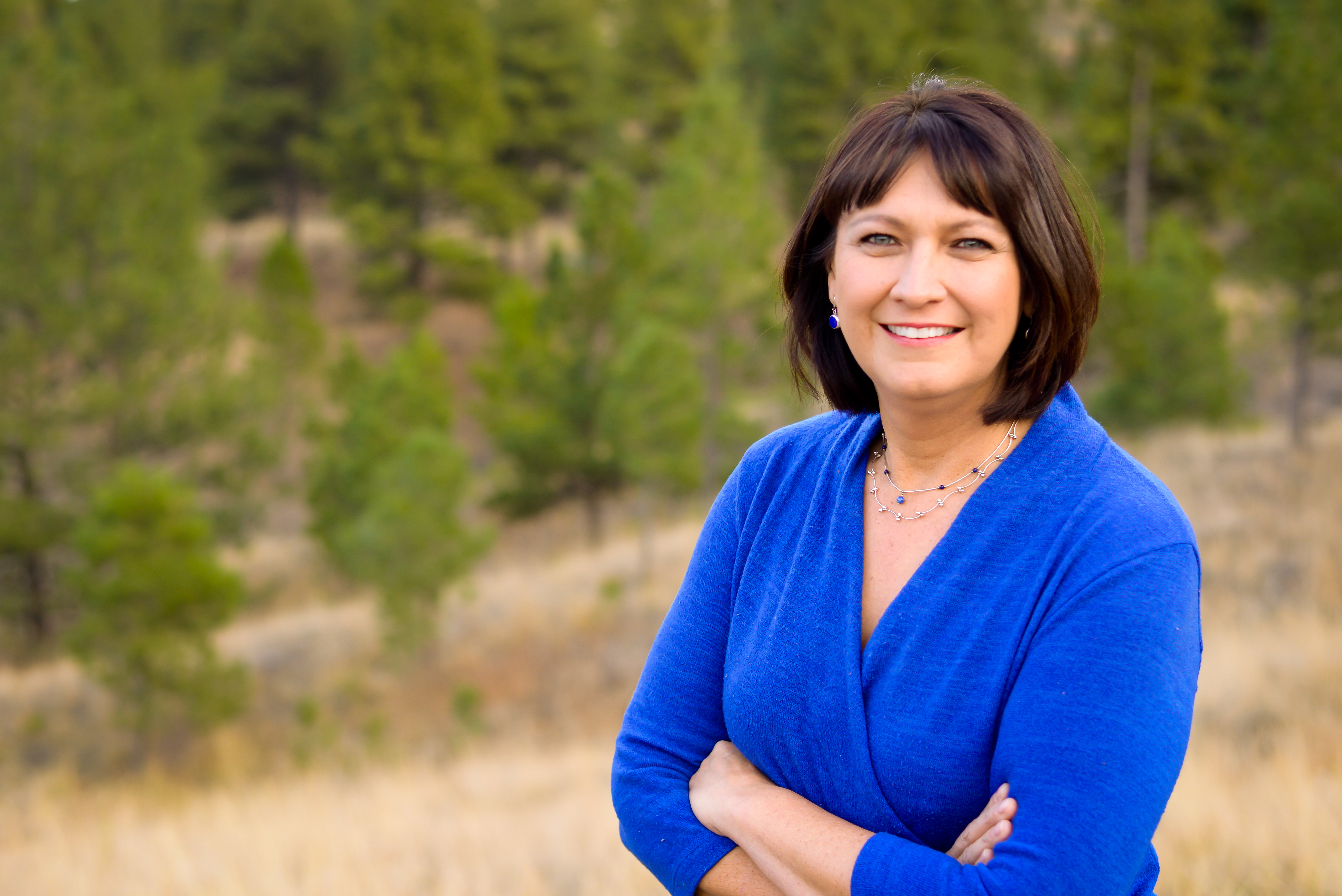 Denise Juneau is campaigning to be the first Native American woman in Congress. She’s already won a statewide race in Montana so she knows what it takes to win.

A Native American woman in Congress? This is Trahant Reports.

One of her first pitches is fantastic, saying her Montana roots run deep. Her family’s ancestry traces back to before Montana was even a state, possibly 54 generations on this soil.

Fifty-four generations. That’s cool. Juneau has many issues that work for her, especially  jobs. As schools’ chief, Juneau increased graduate rates to the highest level ever recorded.

But here is why this race is so important: Juneau can win. Think about what it will mean to have her voice in Congress. She is already the first Native American woman in history to win a statewide election — and soon could be the first to serve in Congress.

Now the nitty-gritty. Juneau can win because she’s already earned votes from Montanans, 235,397 four years ago when she was re-elected schools’ chief. To put that number in perspective: The winning Montana Senate candidate had only 213,709 votes. (The huge difference is because the first number was during the 2012 presidential election year and that’s when Juneau’s  best voters will turnout.)

What’s more: Montana is changing. The population is only about 6 percent American Indian now, but if you look at the schools (where Juneau spends her days) that number is more than double.

Juneau’s first challenge is money. Her opponent has already raised more than $800,000. But if Montana is seen as a “pick up” opportunity, then the national money will be sure to follow. It will also be interesting to see how much money is raised from Indian Country to further Juneau’s campaign.

I think there is one more possibility: this could be a wave election. If the Republicans nominate an outsider for president — Donald Trump or Ben Carson for example — there will be little support for candidates across the border. And by support I mean less money and less organization.

I think this could be a national trend. But it’s even more likely in Montana. A 2010 study by the Cato Institute called Montana “the state with the highest Libertarian constituency in the nation.”

Democrats, on the other hand, will be united behind Juneau.