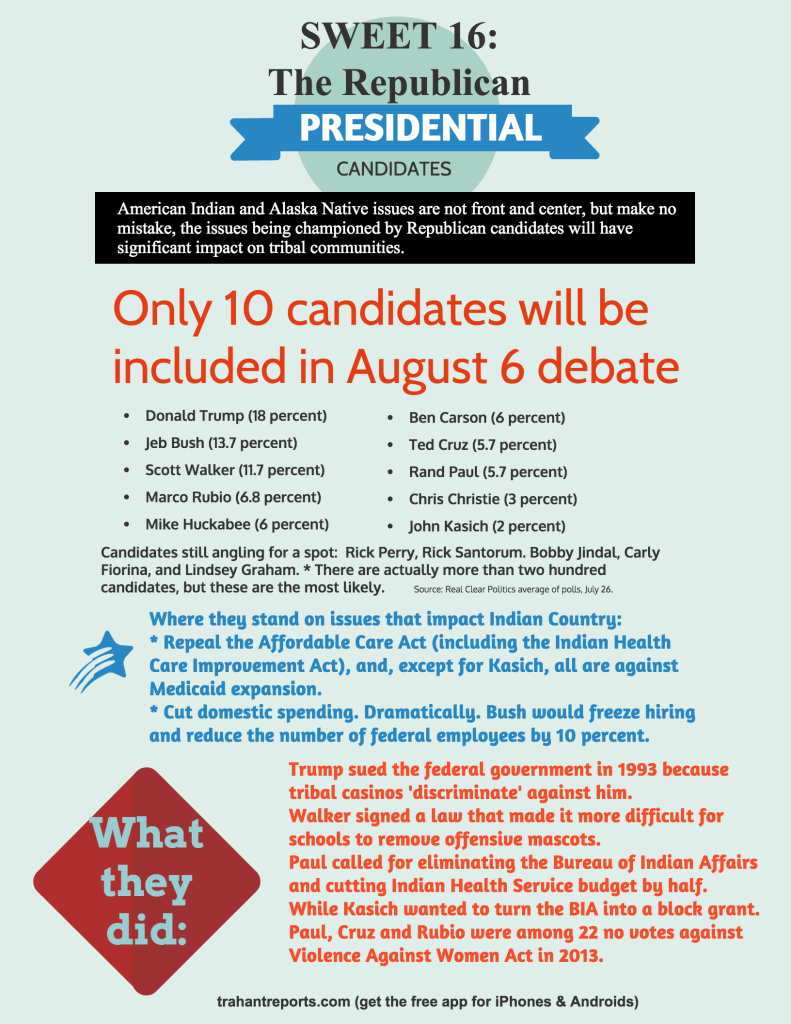 What do you do with seventeen candidates for president? It’s a thorny problem for Republicans. Why’s that? Because right now one of those candidates, Donald Trump, is loud enough to drown out all the other “major” candidates.

Wouldn’t it be fun if the nomination contest was more like a basketball tournament? Then top-seeded Donald Trump would battle 16th seed Ohio Gov. John Kasich a battle of ideas. Or how about dropping the bunch in the jungle Naked and Afraid. We could even start voting and eliminate a candidate every week, until it’s just the Republican versus a Democrat.

Enough. Back to the chaos.

In Cleveland on August 6 the first debate is an opportunity to raise serious issues. As if. It’s more likely to be more of a show than a real discussion.

Of course American Indian and Alaska Native issues don’t get attention this early anyway. Usually that happens late in the campaigns, during the general election, when a position paper is released that outlines the candidate’s official policy. That’s too bad. It would be good to press candidates from both parties about how they see treaties, the federal-Indian relationship, and the management of federal programs that serve Native Americans.

Then again it’s pretty clear where most stand. The Tea Party wing of the Republicans — Trump, Marco Rubio, Scott Walker, Ben Carson, Ted Cruz, and Rand Paul — would dramatically cut federal spending. Paul has even called for the elimination of the Bureau of Indian Affairs and drastic cuts at the Indian Health Service. If any of this happened, the Sequester would be the Good Old Days.

Even a self-described serious candidate, former Florida Gov. Jeb Bush, suggests its time to reshape government. A few days ago in Tallahassee, he said that as governor he used a hiring freeze to shrink state government. He suggested the same approach would work in Washington where only one employee could be hired for every three who retire or leave government service.

Ohio Gov. Kasich used to be chairman of the House Budget Committee when President Bill Clinton declared the “era of big government is over.” That suited Kasich then. And now. One proposal at the time was to “reinvent” the Bureau of Indian Affairs with a block grant program. That House proposal would have reduced the central office operations of the BIA by 50 percent and eliminated Navajo and western Oklahoma area offices. Also on the list  It would eliminate technical assistance of Indian enterprises, through which technical assistance for economic enterprises is provided by contracts with the private sector or with other Federal agencies.” Congress would have ended direct loans and reduce loan guarantees.

The Republicans running for president all share contempt for the Affordable Care Act (and most don’t know that would include the provisions of the Indian Health Care Improvement Act.) All are also supportive of more development, such as the Keystone XL pipeline, and generally dismissive of any action to limit climate change.

I don’t know. I’m still partial to a Naked and Afraid competition