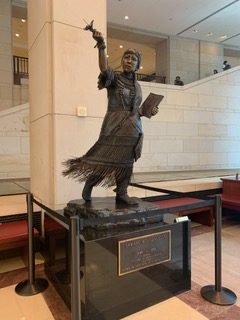 Around the world statues are coming down. Civil War generals. Mass murderers. And Christopher Columbus.

In every case there are far more stone monuments remaining than those removed. A survey by the Southern Poverty Law Center found some 1,800 named memorials honoring Confederates.  Add to that union generals. And military leaders from the American Revolution, the Spanish Conquistadors and etcetera, etcetera, etcetera.

One of the most interesting mixes of statues is found on Capitol Hill. There you’ll find Andrew Expletive Deleted Jackson, colonizer Junipero Serra, would-be dictator Huey P. Long and missionary-murder Marcus Whitman) there is also Kamehameha I, Po’Pay, Will Rogers, Sakakawea, Sarah Winnemucca, Standing Bear  Washakie and Sequoyah.
So at least 4 percent scoundrel (certainly could have added more names to that side of the ledger) and 8 percent Indigenous.
Let’s play “what if?”  though … Imagine the 20th century and the Native leaders that could be honored on civic plazas, in front of city halls or on university campuses. (Yes, there are a few now, but we are talking numbers. At least 2 percent of all the statues.
Who’d be on my list? Start with Vine Deloria Jr., Standing Rock. It’s hard to chronicle Vine Deloria in terms of his importance to the country and to Native America. He was a thinker. An architect of change. And, always, a writer. When it comes to honoring the past, in “Custer Died For Your Sins,” he wrote, “Crazy Horse never drafted anyone to follow him. People recognized that what Crazy Horse did was for the best and was for the people … until we can once again produce people like Crazy Horse all the money and help in the world will not save us. It is up to us to write the final chapter of the American Indian upon this continent.”
Deloria could have been writing about himself.
Another name I would include: Lucy Covington, Colville. She was a rancher turned politician who led the fight against the failed policy of termination in the 1960s. Termination was this idea to save money by ending the federal government’s relationship with tribes.  It was a disaster. She would lead a quiet campaign to quiet what she called “the present fever and fervor for termination.”
This list, of course, is not the end. Only the beginning. Because in a country of this size and diversity it makes little sense to cling to statues that honor only a few. There remainsso many richer stories that have yet to be told.
I am Mark Trahant.