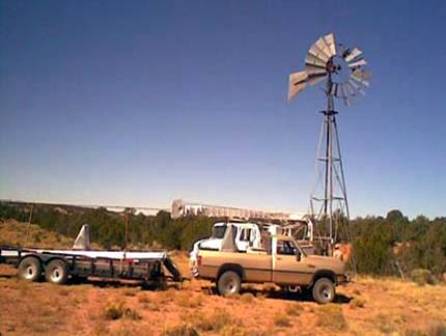 Water projects will be a high priority for infrastructure spending. (Bureau of Indian Affairs photo)
This is the ideal moment for infrastructure projects across the country and the need remains particularly great in tribal communities.
This is Trahant Reports.
Infrastructure is one of those words that has broad support across politics. (The only dividing line is how to pay for stuff.) Everyone knows we need to rebuild so many structural parts of our society. Then again in tribal communities some of these infrastructure projects are not rebuilds … but being done for the very first time.
What do we mean when we talk about infrastructure?
There are roads, rails and bridges. Water systems. Energy transmission — such as electricity. Ports and waterways. And even pipelines.
The shared idea is that these projects are extraordinarily expensive and to be successful there has to be a partnership with the federal government.
John Tahsuda III, who was a deputy Interior assistant secretary for Indian affairs, said that roads and bridges will be high priorities for many tribal communities. He told Indian Country Today’s newscast last week about a “horrific accident in South Dakota where a culvert had washed out.” That’s and example of the kind of projects that need to happen
Across the country there are a lot of aging systems, roads, water pipelines … and that’s why Congress is considering spending the $2 trillion as a downpayment.
In addition to the money there are other challenges for tribal leaders.  In testimony last month, the chair of the Colorado Indian River, Amelia Flores, said “The first thing you need to know: you don’t need to just throw money at the problem. It helps of course, but it’s not the only thing holding tribes back.” She cited a number of legal and policy barriers that make it nearly impossible to maintain a water system.
She said routine maintenance often goes unfinished because the Bureau of Indian Affairs fails to charge water users enough to cover the basic costs of maintenance. Flores testified: “The tribe asks the BIA year after year to raise these rates — essentially taxing ourselves—so that the work can get done. But we have had minimal success even as the maintenance backlog grows.”
None of this is new.  A few years ago a Senate report pegged the unmet infrastructure needs in tribal communities at $50 billion.
Indeed two areas where there will be a lot of discussion are about safe water delivery and waste water management. Both of these were important weaknesses in the transmission of the coronavirus and essential going forward. A report four years ago by the National Congress of American Indians found that nearly 10 percent of American Indian and Alaska Natives do not have access to safe water at home and the backlog of sanitation systems had grown more than 80 percent to $3.39 billion worth of projects.
So, yes,  the federal government is about to spend a lot of money … but there is still a much longer “to do” list.
I am Mark Trahant