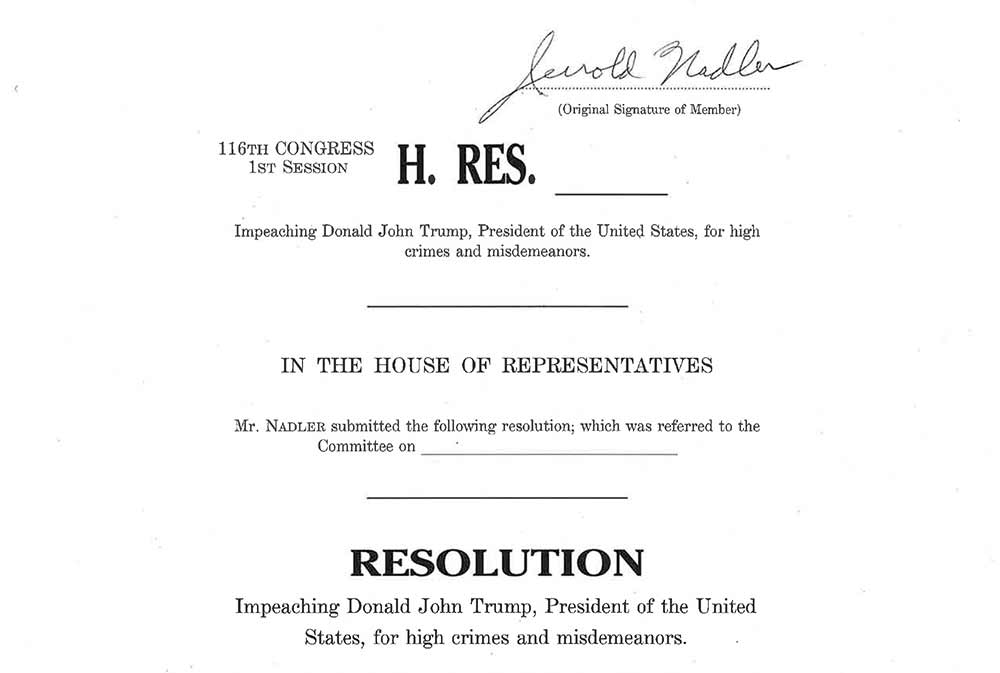 What’s next in the impeachment process? And, will it force President Trump from office?

There have only been three presidents who have been impeached by the House of Representatives. Andrew Johnson in 1868. Bill Clinton in 1998. And now Donald Trump.

Impeachment is only the beginning of the process. The next step will kick in later this week when the House votes to name the managers who will then make a case for conviction.

House Speaker Nancy Pelosi told ABC’s This Week on Sunday that she will formally send the two articles to the Senate. The speaker hopes the Senate will conduct a formal trial, with witnesses, and due process. “Witnesses with firsthand knowledge of what happened. Documentation, which the President has prevented from coming out to the Congress, as we review this. Now the ball is in their court to either do that or pay a price.”

The impeachment trial is political. It takes two-thirds of that body voting to remove a president from office — and that’s unlikely to happen in a body controlled by Republicans.

But there is a lot of drama ahead. For example what will the rules of the trial be? Will there be witnesses? And when? That ruling will be decided by 51 senators.

Some in the Senate see this as nonsense and want to vote to acquit immediately. South Carolina Sen. Lindsey Graham told Fox News: “All I can say is the impeachment articles are a danger to the presidency, the way they impeached the president is un-American. This trial will end in a matter of days, not weeks and he’s going to be acquitted. I hope every Republican votes to acquit and I hope some Democrats will too.”

The politics of impeachment change depending on the party in the White House. The same arguments about witnesses and process that Republicans once made are now those of the Democrats. And the same is true for the Democrats who in Clinton’s day wanted the process over.

Still there are some differences. One is contrition. Bill Clinton admitted doing wrong. “I am profoundly sorry for all I have done wrong in words and deeds. I never should have misled the country, the Congress, my friends or my family. Quite simply, I gave in to my shame.”

Trump, on the other hand, has said his actions were perfect and the impeachment process itself is corrupt.

One final note: The impeachment trial will not be the end of the process. If the Clinton impeachment is a guide, then, there will be a lot of litigation ahead. 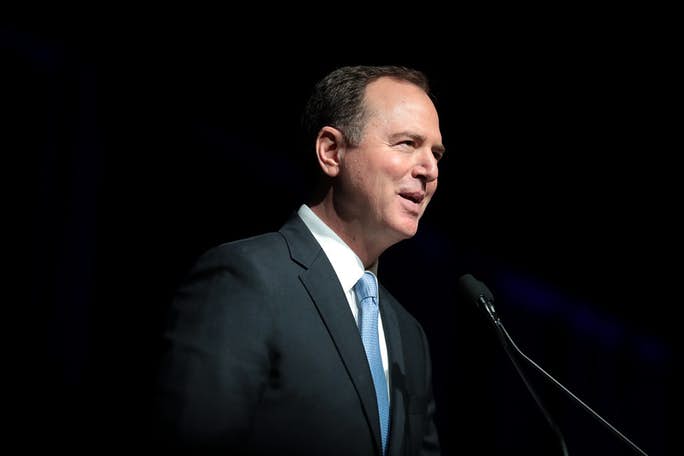 Republicans and Democrats are divided as hearings begin on Capitol Hill

There is a formality to impeachment. It’s not the same as a hearing, this is a House of Congress debating an indictment. It’s solemn event. And the outcome? Well, there are a lot of possibilities.

Adam Schiff, D-California, chairman of the House Intelligence Committee, said the first hearings will begin next week for an impeachment inquiry for President Donald J. Trump.

The first hearing will be Nov. 13 and the second hearing Nov. 15.

This will be the first public airing of any allegations that rise to the level of “high crimes and misdemeanors,” the standard set in the Constitution for removing a president from office.

We already know how divided the House, and the Senate, is already, divided by party identification. But, that is where we begin, not where we end. After public hearings that, too, could change.

There is an interesting range of opinion in the ranks of Indian Country’s representatives in Congress.

Kansas Rep. Sharice Davids, Ho-Chunk, said she supports the House “taking the first step in the impeachment process.” She said she wants to see the people see the facts for themselves.

New Mexico Rep. Deb Haaland, Laguna Pueblo, said the president “and his friends continue to enrich themselves and abuse their power while New Mexicans are struggling … meanwhile, the president and his administration stonewall Congress and refuse to cooperate with congressional investigations.” She said back in August “they are impeding the ability of Congress to get to the truth.”

And, on the side of the aisle, Republicans Rep. Tom Cole, Chickasaw, and Markwayne Mullin, Cherokeee, of Oklahoma have been opposed to the very process. Cole said this “is not a fair process, it is not an open process, it is not a transparent process. He said, instead, it’s a “limited, closed process with a pre-ordained outcome.”

Mullin said the impeachment inquiry is an attempt to “undo the last election.”

But any outcome is not certain. Democrats, at least right now, do not have enough votes to remove the president.

Another option that could surface down the road is a public censure of some kind from Congress. This is a tool that has been used more than a dozen times, mostly a reprimand of individual serving in the Congress itself.

Congress has other tools, for example, it could strip the salary and benefits from any federal employee who refuses to cooperate with the investigation.

The public will have a say, too. If past impeachment hearings are an indication — there will be a lot of interest (or disinterest). And members of Congress will hear from voters about whether they think the process is fair or not.

So the next few weeks will be history in the making. 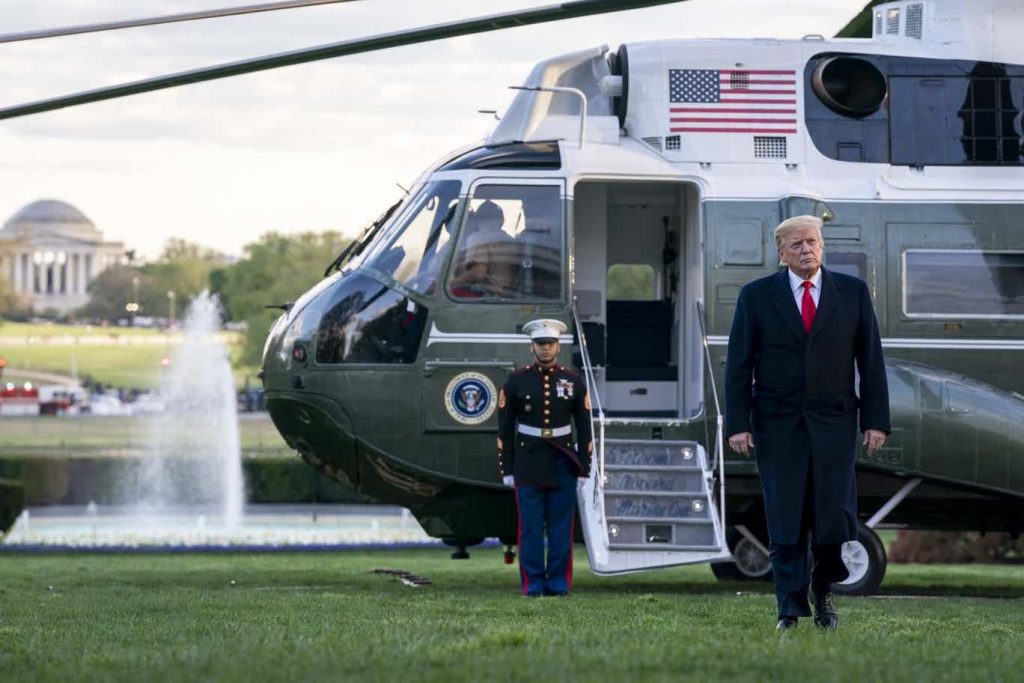 The two-year investigation of the president by the special counsel has been completed and the report finally released to the public. Well, at least a redacted version. We know that the President Donald J. Trump lied to the country. He lied to Congress. (And he likely would have lied to the special counsel, had he answered the questions.)

When a “source” tells a reporter something we do our best to corroborate that information elsewhere. Special Counsel Robert Mueller did that, too. Only he did one better: His witnesses talked under oath. In other words: If they lied, and were caught, they would go to jail. So witness after witness told the special counsel a different story than the one the public was told.

President Trump says the report clears him. He tweeted last week: “As I have been saying all along, NO COLLUSION – NO OBSTRUCTION!”

But the report says something else. “If we had confidence” that a thorough investigation of the facts, “that the president clearly did not commit obstruction of justice, we would so state.”

The president called this investigation an outrage and said no other president should be subject to such acts. But the report resulted in dozens of criminal prosecutions and convictions and some 14 criminal pending cases.

Now the problem in Congress is that Republicans and Democrats are reading the report quite differently. House Democrats say they will subpoena the entire document and will hold public hearings. On CNN, the House’s majority leader, Rep. Steny Hoyer of Maryland said impeachment would not be “worthwhile.”  However other Democrats say the Constitution requires Congress to go forward.

Rep. Tom Cole, a Chickasaw, R-Oklahoma, said the report “doesn’t change the prior conclusions of the 22-month investigation. Redacted or not,” he said, “the report confirms that there was no collusion between Russia and President Donald Trump’s campaign, nor was there sufficient evidence to justify indictment for obstruction of justice.” He said the thorough investigation is over. The results are clearly in. Now it’s time for Democrats to also conclude with their politically motivated investigations and their dubious charges against the president.

So, given the divide between Democrats and Republicans, impeachment is unlikely.

But what about official acts of lying?

There is now documented evidence that the White House press office, including the current occupant, Sarah Sanders, made up stories to protect the president. The report documents at least seven instances of Trump’s press secretaries lying in their official capacity.

Sanders, the president, some government officials, and many Trump supporters, are quick to chant “fake news” when they disagree with the reporting in any news story. The fake news is what the White House was creating.