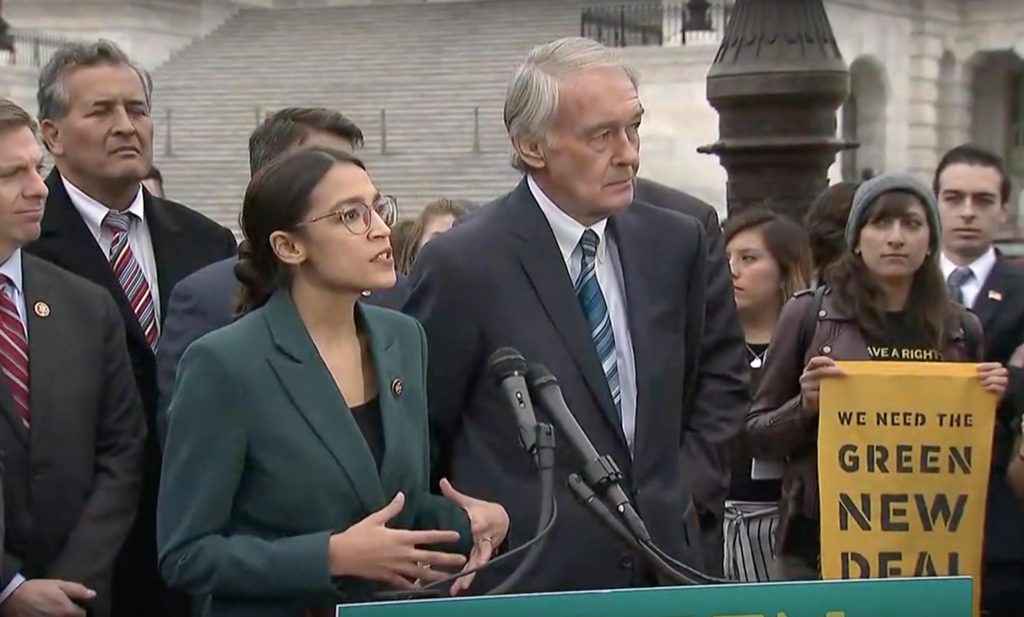 A story from the Quinault Nation is chilling. “Have we eaten our last blueback? Let’s hope not. This salmon season is closed …and“we are now the first generation to begin to feel the effects of a changing climate.”
This is Trahant Reports.

Last week at a Capitol Hill news conference Representative Alexandria Ocasio-Cortez, a Democrat from New York, and Senator Ed Markey, a Democrat from Massachusetts, unveiled “the Green New Deal.” It’s comprehensive legislation that would set the goal of “net-zero greenhouse gas emissions” in a decade.

On Saturday President Donald J. Trump tweeted that Democrats should press forward. “It would be great for the so-called “Carbon Footprint” to permanently eliminate all Planes, Cars, Cows, Oil, Gas & the Military – even if no other country would do the same. Brilliant!”

The Green New Deal raises three big issues: Is the United States finally ready to address climate change? And if so, how? And what would be the impacts on Indian Country?
At some point, sooner rather than later, there is really only one question to address. How much does the country (and the planet) spend on mitigation versus adaptation? Mitigation means trying to slow the impact of humans on the climate by reducing the heat-trapping gases (or removing them). Adaptation means everything else, from relocating people, including cities, to managing climate emergencies, ranging from hurricanes and fires to diseases.

Just this week the Quinault Nation had to close its commercial blueback, or sockeye, salmon fishing for the season.

A tribal news release said that warmer ocean temperatures driven by fossil fuels “are creating lean times for salmon.” “It’s time to hold oil companies accountable for their past record of denying climate change and their current obstruction of policies to reduce climate pollution,” said President Fawn Sharp. “The devastation of our iconic blueback salmon has struck at the core of what it means to be Quinault.”

The politics are complicated. There are essentially three camps in Washington. The first wants action, the position that’s found in the Green New Deal. Another group says climate change is important, but preventing a major disruption in the economy is a priority. Go slow. And, a third group, led by the White House, dismisses the science and any policy that would slow the rush for American “energy dominance.”

The Green New Deal will not be the final word. Even if the legislation makes its way through the House of Representatives (and many Democrats are skeptical) the legislation then must then get through a much more centrist Senate.

Then even the sponsors get that the specifics of the Green New Deal are not as important as movement.
I am Mark Trahant.