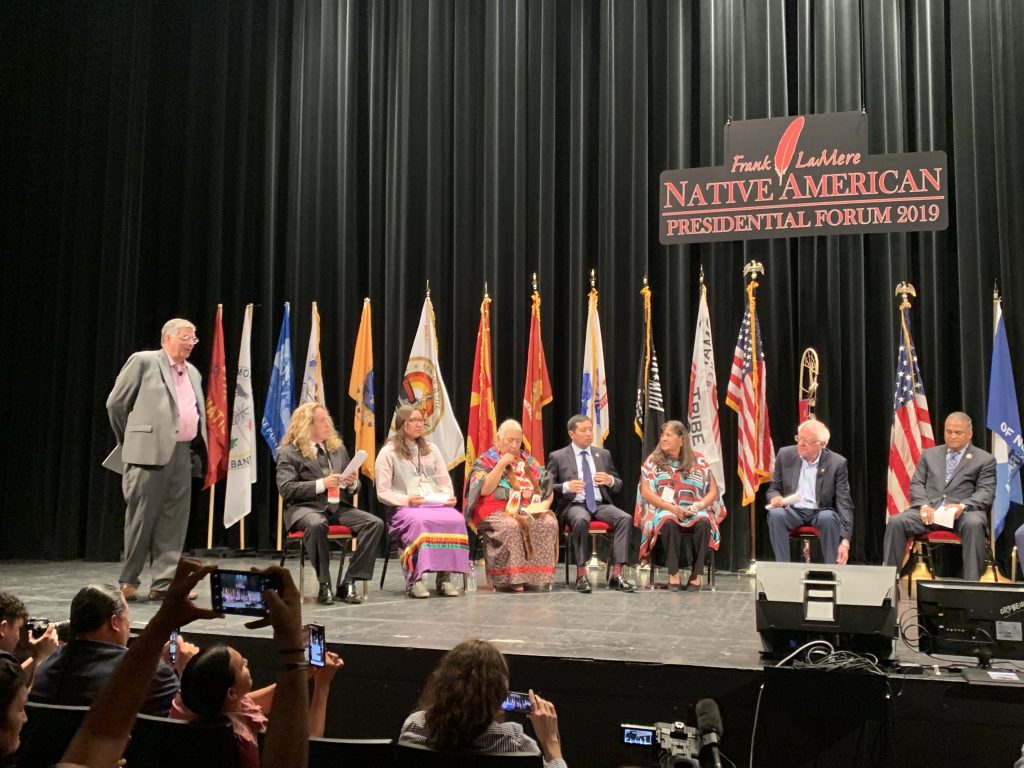 The Frank LaMere Native American Presidential Forum in Sioux City, Iowa, is now history and nearly a dozen candidates, 10 Democrats and one Independent, made their way on stage to talk about their policy positions on issues impacting American Indians and Alaska Natives.

There was history made in Iowa. The sheer attention to these issues was unprecedented.

In 1976 the editor of Wasaja, Rubert Costo, wrote President Gerald Ford, and asked him about his Indian policy. He asked three questions that remain relevant: Should there be a cabinet-level Indian affairs department? How will healthcare reform impact the Indian health system? And since termination is over why not repeal some of the termination era legislation?

Costo wrote that “we operate quietly, but have a great influence upon grassroots Indian opinion.” He said that the next administration, indeed, every next administration, makes important decisions about Indian Country and that’s why candidates’ positions should be noted in advance.

That’s how it was in Iowa.

Every candidate talked about issues that don’t often get explored in a presidential campaign, treaty rights, Indian health, Missing and Murdered Indigenous Women and Girls, Indian child welfare, even identity.

Four of the eleven candidates had the attendees on their feet: Senators Elizabeth Warren, and Bernie Sanders, as well as former Secretary Julián Castro, and Independent candidate Mark Charles, the first Navajo to run for president.

Several of the candidates answered questions that Costo once posed. Sen. Warren said it’s time to repeal Oliphant, a Supreme Court decision that stripped tribes of their law enforcement authority over non-Indian residents (a logic that comes directly out of the termination era).

All of the candidates pledged to fully fund the Indian health system and do more to protect Native women and to invest in data to get a more accurate accounting of the nature of the problem.

Several candidates, starting with Secretary Castro, revealed detailed plans about what they will do in Indian Country after taking office. Marianne Wiliamson said she’d start her administration by taking down the portrait of Andrew Jackson in the oval office.

Nearly every candidate was asked the first question by Marcella LaBeau from Cheyenne River, and a 99-year-old veteran of World War II. She was honored for her nursing work on the battlefield by the French government with a medal of honor. So her question is why does the United States still honor those soldiers who killed women and children and Wounded Knee?

The answers were unanimous. Every candidate said we should and it’s time to rescind the medals of honor.

What will happen next? A lot actually. The candidates left Iowa with a deeper understanding of Indian Country and that will serve them well no matter what they do next, be it President of the United States, or serve in the cabinet, on in Congress.

I am certain of this because all you have to do is look at how far we’ve come since Rupert Costo wrote to Gerald Ford. Ford did not bother to answer. That era is over. Presidential candidates are now answering our questions.