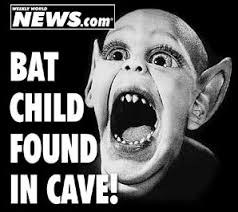 What is fake news? And, how do you spot it? How do you make sure you know you are reading or hearing something of value.

Fake news is not a new thing. I remember the Weekly World News – a supermarket tabloid – with headlines such as:

“Dick Cheney is a robot!”

Many, many versions of “Elvis is Alive” (and usually doing something remarkable).

And, my favorite, “Bat Child Found in Cave!”

So fake news is not new at all. But what makes it a topic is that stories like the ones I just mentioned are easily shared on social media. In a supermarket line, we look at the headlines and laugh. On social media too many treat the sources as legitimate and serious.

The web site Fake News Watch breaks the content into three categories. Out and out Fake News; Satire; and Clickbait.

The goal of fake news sites is to get people angry after they believe the story, to discredit other media, and to get people to share.

Satire sites, such as The Onion, are supposed to be funny. A laugh. But connected to the truth?  Sometimes. Humor also requires discernment. There is a difference between the Daily Show — one that builds its humor off of real news and The Onion. The Onion is funny but it just makes stuff up. We need both kinds of humor. But we also have to know the difference.

The third category is clickbait. Clickbait websites take bits of true stories but insinuate and make up other details to sew fear.

So how do you defend yourself against this nonsense?

Facebook is taking some steps. But the best thing is for everyone who uses social media to ask themselves, Is this really true? Do that before passing it along. A few things to look for are lots of exclamation points, phrases written in all caps, and bad grammar or spelling.

Real journalism practices the craft of verification. It’s not enough to learn a fact — that fact should be checked out.

Indian Country has its own stories about fake news, too. There have been reports from Standing Rock, for example, that were passed along on social media (such as helicopters gassing the people at the camps) that did not stand up to verification. On a story that big, that important, it’s especially critical that people share accurate accounts. Rumors and hoaxes are dangerous business.

So it’s one thing to learn from what you read, see or hear. But it’s also essential to also verify that information.

Now back to the adventures of Bat Boy … I am Mark Trahant.