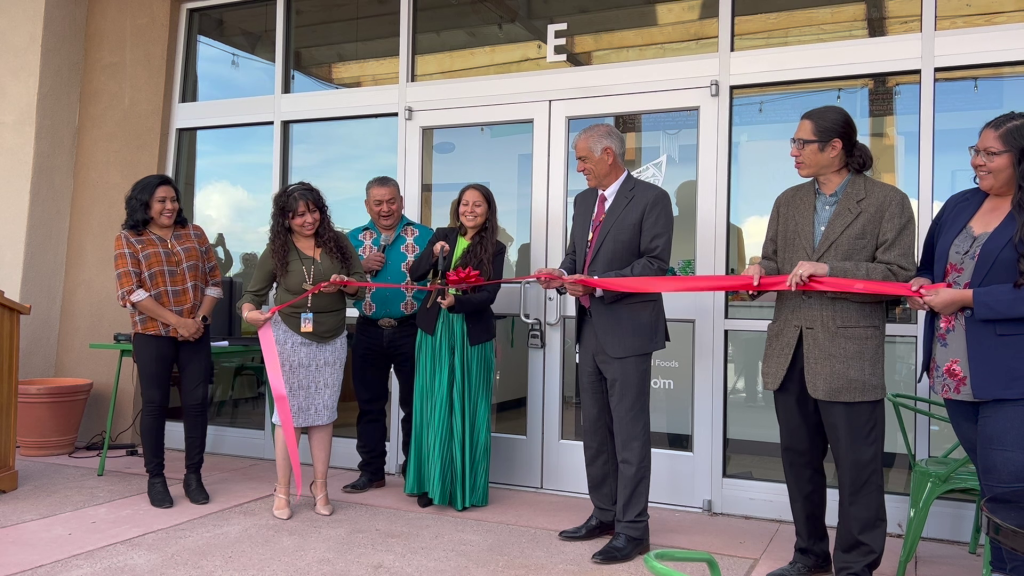 Halloween cries out like a banshee for scary stories and there are many traditional and modern Native narratives that fit the bill. Monday on Native America Calling, Shawn Spruce heard some favorite stories for the season and checked in on folks whose experiences gave us goosebumps with storyteller Leeora White (Seneca); Lopaka Kapanui (Kanaka Maoli), storyteller, author, and founder of the ghost tour “Mysteries of Hawaii“; Nancy Fields (Lumbee), director and curator at The Museum of the Southeast American Indian; and Ishmael Hope (Tlingit and Inupiaq), poet, storyteller, and Indigenous scholar.

Indigenous people in Mexico are much more likely to face poverty, human rights abuses, and discrimination than the rest of the country’s population. The UN Special Rapporteur on Indigenous Peoples Rights has repeatedly called out Mexico’s government for a “serious pattern” of abuses against Indigenous people that includes the murder or disappearance of Indigenous environmental or human rights activists. Unlike in the United States, Mexico’s government does not official recognize or support the country’s Indigenous populations. Tuesday on Native America Calling, Shawn Spruce met those fighting for Indigenous rights in Mexico with Odilia Romero (Zapotec), co-founder and executive director of Comunidades Indigenas en Liderazgo (CIELO); Alan Dillingham (Choctaw), assistant professor of history at Arizona State University and author of Oaxaca Resurgent; Arcenio Lopez (Ñuu Savi), executive director of the Mixteco Indígena Community Organizing Project; and Dr. Shannon Speed (Chickasaw), director of the American Indian Studies Center (AISC) and professor of gender Studies and anthropology at UCLA.

Citizenship is one of the keystones of sovereignty for every tribe. And it’s absolute: you’re either a tribal citizen through lineal descendancy, blood quantum, or another agreed-up measurement, or you’re not. But Native identity sometimes extends beyond citizenship and there’s little agreement about those boundaries. Wednesday on Native America Calling, at a time of increasing scrutiny of those who claim—and build careers on—Native identity, Shawn Spruce gets the perspectives from tribal leaders on what makes identity and why it’s so important to get it right with Cathy Chavers, chairwoman of the Bois Forte Band of Chippewa Indians and the president of the Minnesota Chippewa Tribe; Dr. Aaron Payment, former chairman of the Sault Ste. Marie Tribe of Chippewa Indians; Nathan McCowan (Tlingit and Haida), president and CEO of St. George Tanaq Corporation; Patt Iron Cloud AKA “GrandmaPatt”, councilwoman for the Fort Peck Tribes; and Harold “Buster” Hatcher, chief of the Waccamaw Indian People.

Tribes in Oklahoma are actively working to unseat the incumbent governor—who is a Cherokee citizen—because they say he is the most anti-Native American state leader in recent memory. A judge recently dissolved the Osage Nation reservation, saying Congress probably would have gotten around to disestablishment at some point anyway. And tribes are fighting the state’s new anti-Critical Race Theory law, saying it hampers students learning about the state’s long history of Native American oppression. Thursday on Native America Calling, Shawn Spruce checks in on the unique relationship tribes have with the state of Oklahoma.

Stay connected to our social media channels for details about Friday’s episode.

Alaska’s snow crab season is cancelled for the first time ever after a mass die-off all but wiped out the crustaceans in the Bering Sea. Officials estimate the snow crab population plummeted by at least 11 billion in a relatively short time. Many experts theorize warming waters are the main culprit. The harvest is crucial for local economies. Today on Native America Calling, Shawn Spruce hears about the immediate implications and concerns about the future of crab harvests with Mike Litzow, marine biologist and director of the Kodiak Lab for the National Oceanic Atmospheric Administration Fisheries; Phillip Zavadil, city manager of St. Paul Island, AK; and Dennis Robinson (Qawalangin Tribe), president of the Qawalangin Tribe of Unalaska.

There is no break in election campaigns anymore. Party operatives work long hours year round to find ways to bring voters to their side—or at least away from their opponents’ side. Even so, as the Midterm Election nears, information is moving at light speed and so much of it is exaggerated, misleading, and even false. Today on Native America Calling, Shawn Spruce provides tools the average citizen can use to make informed election decisions with Jason Begay (Navajo), associate professor at The University of Montana School of Journalism; Angela Willeford (Salt River Pima-Maricopa Indian Community member), intergovernmental relations project manager at Salt River Pima-Maricopa Indian Community; Adrian Jawort (Northern Cheyenne), transgender two-spirit journalist, fiction writer, fact checker, and research and Political Director Indigenous Transilience in Montana; and Dr. Torivio A Fodder (Taos Pueblo), manager of the Indigenous Governance Program at the University of Arizona.

The Native American Graves Protection and Repatriation Act dictates remains from federal lands or in institutions receiving federal funds be returned to their tribal descendants. But what of remains from private lands or in museums that don’t take government funds? It was once common practice for archaeologists—both professional and amateur—to plunder burial sites. Some unscrupulous outlets still have ancestors’ remains on public display. Today on Native America Calling, Shawn Spruce gets a rundown of places that enjoy NAGPRA’s loopholes with Shannon O’Loughlin (Choctaw), attorney and the executive director of the Association on American Indian Affairs; Kenny Bowekaty (Zuni), tour guide and archaeologist for the Pueblo of Zuni; and Bryon Schroeder, director of the Center for Big Bend Studies at Sul Ross State University.

Tribal courts are asserting their ability to mete out justice and work toward healing. Many tribal courts are being recognized for restorative justice and for providing a means to address wrongs that go unresolved in other courts. Thursday on Native America Calling, Shawn Spruce spoke with Matthew Fletcher (Grand Traverse Band of Ottawa and Chippewa Indians), law professor at the University of Michigan Law School and author of the “Turtle Talk” blog, and Matt Johnson (enrolled in the Cayuse, Umatilla, and Walla Walla; the Confederated Tribes of the Umatilla Indian Reservation), court director of the Umatilla Tribal Court.

Trick-or-treating and costume parties are back on this year after pandemic fits and starts. That means lots of candy and chocolate. Friday on Native America Calling, in our regular feature The Menu, our resident foodie Andi Murphy took a look at the Indigenous origins of chocolate with Julio Saqui (Mayan), founder and owner of Che’il Mayan Chocolate; checks out Itality, a new plant-based Native restaurant in Albuquerque, NM with founder and owner Tina Archuleta (Jemez Pueblo); and chats with Monie Horsechief (Pawnee and Cherokee), owner of Horsechief Catering and this year’s National Indian Taco champion.

Big Medicine to be returned to CSKT