Alaska Sen. Dan Sullivan will have to decide what’s more important: Tax cuts or Medicaid? The Senate vote is expected to be close. Both Sullivan and Sen. Lisa Murkowski have said they remain undecided about the legislation because of its impact on Alaska.

The Senate healthcare  bill, like its House counterpart, has a simple message for Indian Country: Don’t get sick. Not in June. Not anytime soon. This bill is not about health care because it takes billions of dollars away from public health insurance and passes that savings to wealthy Americans via tax cuts.

How bad could the legislation be? The official financial review from the Congressional Budget Office is expected soon. The scoring of a similar House bill projected that by next year 14 million more people would be uninsured. And by 2026, an estimated 51 million people under age 65 would be uninsured. 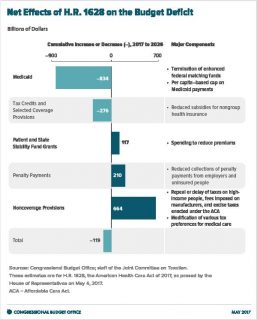 The important takeaway from both the Senate bill and the House version is that it strips money away from Medicaid ($834 billion) — a public insurance program for people who are poor or disabled — and gives that money back to high-income taxpayers ($664 billion).

The Senate bill takes a little longer to destroy Medicaid. It begins phasing out the expansion in 2021 and that will be completed by 2024. The Republicans argue that this would control costs, slowing the growth of government spending. (Now Medicaid is automatic: If you are eligible, the money is there.)

Medicaid accounts for about 20 percent of the budget in most Indian health system clinics and hospitals. And, more important, it’s a growing source of funding. It pays for medical procedures and for transportation to clinics. It’s the big ticket.

But Medicaid is also an odd duck. It’s officially a state-federal partnership so the federal government picks up most of the cost and sets some of the rules, while states get to determine other rules. Both the Senate and the House bills would let states do more (such as requiring patients to work) or especially, what’s covered by insurance.

This is particularly messy for Indian Country. Both the Senate and House bills recognize the Indian Health System as unique (and paid for by the federal government). So the legislation preserves the 100 percent match. And in theory both the Senate and House would keep in place federal rules for tribal members on some state requirements such as work rules. The states that now have Medicaid expansion, through the Affordable Care Act would have to phase that out.

The biggest problem for Indian Country is that the Senate and House bills would destroy the framework of Medicaid. The thinking goes that Medicaid is just another word for welfare and states should sharply reduce what is spent by government and let hospitals cover the cost of “charity.”

The Senate vote is expected to be close. And that means the bill could change again as leaders try and round up enough votes for passage. I am Mark Trahant.