Our Voices Will Be Heard is a 59-min radio theater adaptation of a play about a powerful mother- daughter journey that reveals how generations face the choice of continuing to perpetuate—or disrupt—family violence. Through the lens of fiction, and the palette of Alaska Native Storytelling, the playwright tells the true story of her mother’s strength against impossible pressure. Our Voices Will Be Heard weaves together legend and truth in a fierce call for healing and forgiveness.

Our Voices Will Be Heard was written by Vera Starbard who is Tlingit and Dena’ina, originally from Southeast Alaska, and now resides in Anchorage, Alaska. She is the Editor of First Alaskans Magazine, and Playwright-in-Residence at Perseverance Theatre in Juneau, Alaska.

The play was directed by Larissa FastHorse who is a Lakota playwright, choreographer, and director, based in Santa Monica, California. She has written and produced numerous award-winning plays, and is a member of the Rosebud Sioux Tribe. 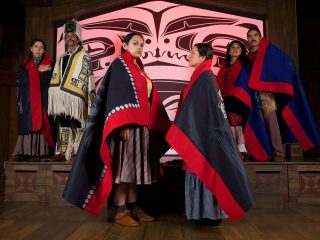 Our Voices Will Be Heard Cast

Listen to the Radio Version: