Deb Haaland and Diane Benson at an Anchorage fundraiser. Haaland is running for Congress in New Mexico and Benson has been a candidate four times in Alaska. (Trahant photo)

How many Native American women have ever been elected to Congress? This is Trahant Reports.

New Mexico congressional candidate Debra Haaland is criss-crossing Indian Country. She’s determined to get her name out there — and to raise enough money to be competitive. She began last week in Milwaukee at the National Congress of American Indians and she wrapped up the week in Anchorage at the Alaska Federation of Natives.

Politics is a tough business. Most Native American candidates cannot dip into their personal wealth to run for office (at least the Democrats). It’s all about raising money five bucks at a time. A good haul is when someone writes a check with more than one zero.

Yet it’s hard to understate how important money is to a campaign.

Haaland’s fundraiser in Anchorage was typical. It was much more of an introduction than a call for hard cash. That’s important. It was great to hear stories. We need that in politics. But it will take money, too. If we really want to see more Native Americans in Congress, because thousands of  five-plus dollar donations will make all the difference.

At that event one of the most touching moments was when Diane Benson, who ran for Congress in Alaska against Rep. Don Young, talked about why she ran. Her son had been injured in the military and yet politicians were making war and peace decisions without an understanding of the consequences.

I have been collecting information about Congress and Native American representation. And, it turns out, I was wrong about the actual numbers. I checked this morning and according to the House of Representatives historian since March 4, 1789, there have been  10,273 people elected to that body. There has never been a Native American woman. Ever. 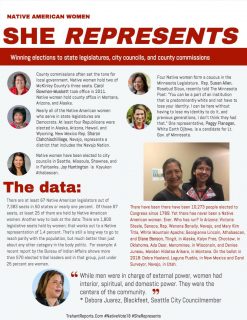 Here is my list of the Native American women who have at least run for Congress, starting in 1988, Jeanne Givens, a Couer d’Alene tribal member in Idaho was the first.  Georgianna Lincoln in Alaska, Ada Deer, Menominee, in Wisconsin, Kalyn Free, Choctaw, in Oklahoma, Diane Benson, Tlingit, in Alaska, and Denise Juneau, Mandan Hidatsa Arikara, in Montana.

And in this election cycle, Carol Surveyor, Navajo, is running in Utah’s 2nd congressional district.

I better stick with “at least” because I am sure more names will surface. But the point remains: It’s long past time to elect the first Native American woman to Congress.

I am Mark Trahant reporting from AFN in Anchorage.