The next national election is still more than a year away. But this is the time when many candidates make the decision to run for president, for the U.S. Senate, and for Congress.

The next national election is still more than a year away. But this is the time when many candidates make the decision to run for president, for the U.S. Senate, and for Congress.

In this season Indian Country’s first big political news is that Deb Haaland is passed on a Senate race.

She told supporters Wednesday via Twitter: Since Sen. Tom Udall’s “announcement that he would not run for re-election, I have been overwhelmed by the daily encouragement of family, friends, supporters, and New Mexicans across the state to run for the open seat.”

She said “after much thought and conversation, I have decided to continue serving the people of New Mexico’s First Congressional district, fighting for a Green New Deal, protecting our public lands, pushing for Medicare for All, and reforming housing for our military personnel.”

An open Senate seat is a rare opportunity. And a Native American woman has never been elected to that office.

Yet there are lots of reasons why this decision makes so much sense. Haaland has already shown extraordinary leadership in the House and she is well-regarded by the majority party Democrats. And, by seeking re-election instead of a Senate race, she could be setting out on the path toward House leadership.

Of course Haaland, Laguna Pueblo, and Rep. Sharice Davids, Ho Chunk, are the first two Native American women ever elected to the Congress.

It’s early yet in this election cycle and there are still many routes that could place a Native woman in the Senate. Remember a third of that body will be up for election, including states where there is a significant Native vote such as in Alaska.

There is also an open Senate race in Kansas because of the retirement of Sen. Pat Roberts. Rep. Sharice Davids could opt for a statewide run — a tough climb in such red state — or like Haaland run for re-election. 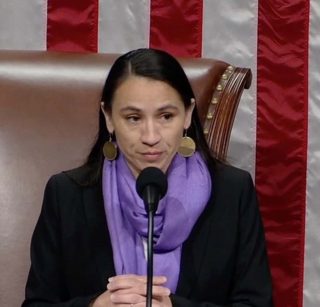 One interesting tidbit: The second election that is considered the most important one for politicians who want to serve enough time to get something done. Once a candidate wins that race it’s much less likely they will be defeated, in fact, the other party is less likely to even spend money on an attempt. So for Haaland and Davids this election represents that long game.

The Kansas City Star recently profiled Davids and said “while her personal biography is barrier-breaking, Davids’ approach to her first 100 days in office has been exceedingly traditional, marked by deference to leadership and studious attention to the details of legislating … Davids has quietly been laying the groundwork for a longer game.”

And it’s that long game that makes a difference.